Dave Keneston is the host of the I Fucking Love That Band and Old School Record Review podcasts on Old School Record Review.  He  also contributes written pieces on occasion for OSRR. Dave is an amateur musician and has been a music enthusiast his entire life. His main focus for the podcasts is to give different perspectives and genres a voice, while simultaneously talking a lot of shit, and having a good time. If you would like to be a podcast guest or just want say what’s up, Dave can be reached by email at OldSchoolRecordReview@gmail.com and his twitter handles are @oldschooleview and @dkeneston. He invites all points of view as having a passion for music and generating dialogue are of paramount importance to his life.

Matt Meade is a freelance writer and a failed musician.  He grew up in upstate New York, and now lives just outside of Chicago.  His guilty pleasures include bad horror films, going commando, and ice cream with a lot of stuff in it. He can, at times, be a bit self-righteous, and he is always grumpy in the morning. You can contact him at OldSchoolRecordReview@gmail.com and you can follow him on twitter @MatthewTMeade. 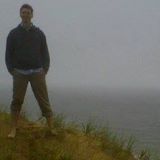 Noah Kucij is a teacher and writer — fascinating combo, no? — situated in South Carolina.

Matt Rector is uniquely qualified to judge the musical output of others because he has absolutely no musical talent or training himself. Also because of his smug eyebrows. Contact at OldSchoolRecordReview@gmail.com.

Dave is an artist, designer, and film maker working at Lehman College in the Bronx. He ensures the uptime of anything plugged in. He also teaches graphic design, digital media, and documentary filmmaking. He listens to music all day, he’s developing a documentary on the origins of music, and he can’t talk to you if music is playing.

Sarah Gray’s favorite color is yellow.  One time she pet a tiger and a giraffe, but not at the same time.  She has played three instruments in the past and remembers how to play one of them, but intends to use none of that expertise on this site.  She lives in Boston with her books and her clothes and two chairs.

Josh likes music except that dreadful band Vampire Weekend, and he thinks that alone qualifies him to be a music critic with a good ear. He teaches English Composition at three (or is it four?) area colleges. This puts him in a position to neither collect health insurance nor sick pay, but enough time to write about artists much more talented than himself. When not traveling the globe, having heartburn from too much Buffalo wings, or going to shows, he lives with his spoiled cat and tolerant wife in Albany, New York. 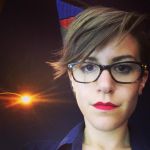 Contributing editor Alyssa Vincent is a librarian, a fashionista, a former journalist, a smasher of the patriarchy and she once zinged Ira Glass.  She dares you.  She double-dog dares you.