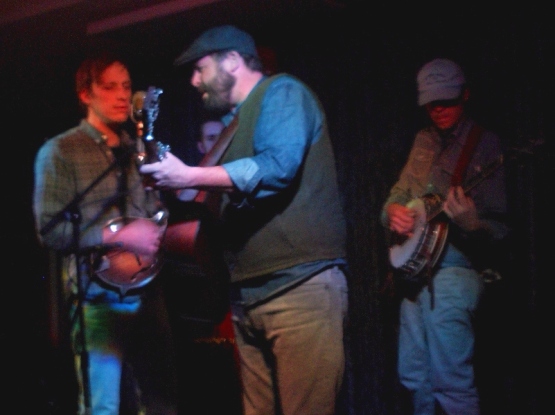 You just can’t put the music of Town Mountain in a box. Like a lot of bluegrass bands, the Asheville, North Carolina, outfit offers a trio of impressive instrumentalists in fiddler Bobby Britt, mandolinist Phil Barker, and banjo player Jesse Langlais. These guys can, and will, pick fast, but they are also unafraid to put their talents to work in service to a greater whole. Unlike many of their peers, the band has singer and guitarist Robert Greer, whose voice could stand up next to any of the classic Outlaw Country singers. All four men compose songs for the group, and all four take their turn in the spotlight on stage. Their arrangements of their own songs, and the numerous covers they have interpreted, expertly weave all these elements together to create something cohesive, rather than just a bunch of guys taking turns picking.

When I sat down with Langlais prior to the groups’ show in Northampton, I asked how the band sees its place in today’s musical spectrum:

“Bands juggle what they think fans’ idea about the music is, and what their idea about the music is. That happens with us all the time. Over breakfast this morning, we talked about what path we should take. If you ask a traditional bluegrass lover, they might say we’re progressive bluegrass. A progressive bluegrass lover might say we’re traditional bluegrass, we kind of ride the line.

“We take elements of old bluegrass and country music and try to inject those elements into the songs we write. We’re not trying to create something different, but trying to help the longevity of some of those musics. With the covers we chose, we try not to just take it and bluegrass it up, play it fast. We do our best to preserve some of the integrity of the original recording.

“Playing for older audiences is great. We’re also constantly trying to play for younger audiences. We’d like to apply our band to the jam scene, to the Americana scene. Anywhere people aren’t so in tune to what bluegrass is, but maybe they just don’t know about it and would like our take on it.”

While performing, Langlais operated as the glue that bound the band’s songs together. His timely fills and melodic picking often added depth to the group’s overall sound. His compositions, such the Jimmy Martin-esque “I Miss the Night,” which will appear on the band’s new album later this year, showed his ability to set the table for his bandmates with his banjo.

A large man with a powerful, rich, comforting voice, Greer’s presence dominated the stage. He drove the tempo on boot-stomping clap-alongs like “Ruination Line” and “The Bush Is Burning.” He showed his ability to set a mood and draw the audience in with covers of George Jones’ tune “The Race Is On,” and Bruce Springsteen’s “I’m On Fire.” He made our hearts ache on the Phil Barker-penned “Midnight Road”:

Barker’s ability as a songwriter and vocalist adds another element to Town Mountain’s already diverse musical arsenal. They performed several of Barker’s songs that will appear on the new album, including “Arkansas Gambler,” and “Get Up the Ladder.” Barker’s shining moment came when he took the lead on his song, “Law Dog,” howling his way through a ballad that might just as easily have been written by one of the Dukes Brothers. Here he is performing it at American University’s radio studio last year:

If the night had to belong to one man, however, it would’ve been fiddler Bobby Britt. His spiraling solos turned through song after song as faces in the audience squeezed their eyes closed and swayed to the sound of his strings. His furious work on the band’s finale, “Sparkle City,” got the crowd so worked up that we chanted them back onstage for an encore. Langlais approached the microphone and asked the sound man, “Can you turn the fiddle up, and turn everything else way, way down?” Britt then elaborated on his spectacular chops with the classic fiddler’s anthem, “Orange Blossom Express.” From my vantage, I could see Greer’s face as the band leader shut his eyes, and a slow smile crept across his face before he hollered out, “Yeah! Get it Bobby!” I was reminded of what Langlais had told me a few hours earlier, when I asked him what motivates him as a musician:

“A lot of musicians probably question what they’re doing every day. It’s glamorous on the outside, but it’s hard work, and you don’t always get compensated for the amount of time you put in. But when I say that to my fiance, she always says, ‘But you make people happy.’ So in a simple answer, I love it because we make people happy. We don’t always think about that as musicians, when we’re standing on stage, but that is a big part of it.”

I sure saw a lot of smiling faces at The Parlor Room on Friday night.

Town Mountain has tour dates scheduled through July. Their new album is scheduled to come out later this year.

Coordinator of The Block Center, a positive youth development program in Troy, NY
%d bloggers like this: