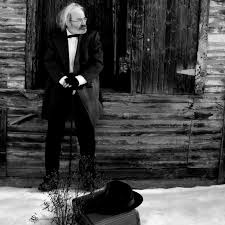 n aging ageless elder man with a rickety voice like stacks of books on old wood, he arrived here by train having spent much of his time working for a traveling theater. Sherwin Sleeves will often just up and go on a ten mile walk into the midnight, bad leg and cane be damned, without the least idea where he’s headed, or when he’ll return, or with what new stories and possessions in tow.

Or at least so says Sean Hurley, his “ombudsman, gopher, handyman, internet person, musical assistant, and all around amanuensis,” who explains this in one of the only biographies we have on the man. Sherwin orates tales and writes music about the town of Lemon and all its strange inhabitants and goings-on. Sean serves as the caretaker of these yarns and gets them to our ears in the form of a podcast called Atoms, Motion, and the Void. He’s also lovingly assembled the songs that appear on said podcast into a collection called The Poor Man’s Lullaby, occasionally appended by new versions or companions on the RadioGhost website.

Lullaby features songs that serve as interludes in the ongoing story of Sherwin Sleeves’ adventures through life and Lemon. Before I highlight my favorite tracks, and why you should listen not only to this album but also to anything else he maybe happens to leave in a brown-wrapped package at your doorstep, I should write briefly about Atoms, Motion and the Void.

Sherwin begins his story at the Abandoned Barns, Chapter 1, and in subsequent half-hour to hour-long segments, he describes his town like a meandering walk through tableaus where folks like Tom Waits or Richard Brautigan would feel at home. We learn of Lizzy Queelfight and the People of the Trees, The Pennbennies, and the Demon of Lemon of Repulsive Addition, a beautiful palindrome of dark magic and regular paranoia brought on by lurking shadows and strange tea.

At a certain point in these enchanted wanderings, Sherwin co-invents a game of Checkers and Chess pieces, dubbed Chesskers initially, but later Madrigal! as an exclamation made by the winner of the game, which can only be one of its creators: Sherwin or the Sheriff of Lemon. The game is canceled by a call to investigate the Flashlight Jaspers, a family alleged to be living in a house without electricity that, by day, is a museum open to the public—a living museum about life in the Jasper household whose entry fee pays for the week of flashlight batteries needed by the family to live on the premises at night.

The lush tale unfolds from there in all of Sherwin’s colorful musings. But where I got strung up is in the story’s musical interludes. In the Flashlight Jaspers chapter, just before the Sheriff and Sherwin slip off to make a house call, “Lost and Found” breaks the action with a slow piano build into string accompaniment, and firm, careful vocals by Sherwin himself. “I sing with the birds/ so the sky stays awake/ I sleep in the trees/ with the fish in the lake” he intones, and later admits, “I don’t have a penny/ but I don’t owe a man” before he confesses he may as well “go lay down in the clouds” as we’re all out looking for the lost and the found. As lyrics alone they perhaps are quite simple, but with his tick-tocking piano and self-harmonies, they arrest the ear and sting the heart. This tune lies at the fulcrum of the thirty-seven-track digital release of The Poor Man’s Lullaby.

As you wade through the list of Sleeves songs that Sean Hurley has presented, most having appeared first during the Atoms podcasts, you begin to get a sense of a man who has lived thousands of lives in different worlds. He seems at the teetering age of someone about to pass away quietly in his sleep, but more and more gives the impression he’s always been that old. And maybe he always will be.

The album itself is inconsistent, but I think of it more as having fearless variety. Its first tracks are laden with synthesized drumming, before landing in melancholy piano and some gentle harmonies on “House in Eden”. We wrench back to a percussive talking-song with “Hence I Lied” but shortly afterward find a solo piano bit where he reminds us “no one’s saying you can’t go home again/ from once upon a time until the end” in a forty-eight second philosophy. None of the songs on the album breach four minutes, and most hover around three. Sherwin keeps focus by spinning mythic tales about himself and a world of characters and locales, often with utter hilarity in pieces like “The Concession Song” where a derelict refreshment bar is interminably out of pickles, and has “no Mexican food at all, I’m afraid.”

“The Moon Song” and “The Fireman’s Waiting” are other standouts I recommend if perusing the album, and maybe check out “Butterfly with a Bloodshot Eye” while you’re at it. “Tourniquets & Windmills” began its life as a song about Sherwin’s friend Fez, the co-host of a satellite radio show who spent some time in the hospital. The origin of “Concession Song” was similar, as it was first an anthem called “Appendix Time.” Sherwin later used some of these tracks on another digital release full of songs inspired by people as varied as John Hughes, Jay Mohr and Dave Chappelle. Much of his music appears on the aforementioned Sirius XM show, Ron & Fez, and has also been cataloged in releases like Peas Hode and Oddy Clone. The latter release is co-performed with Roy Harter, delivering integral gems like “Fingerprints of the Fallen Down” (which also interludes on Flashlight Jaspers) and “Bonesetter,” both tracks heading off the shorter 12-track album.

This self-fulfilling legend Sherwin Sleeves could potentially cease to amaze you at a certain point, were it not for the final leg of his veritably centipedic biography: the man’s existence feels inextricably buoyed to that of Sean Hurley’s. This includes the music, the stories, and even the doddery old voice of the storyteller purported to be living at the top of Marked Mountain, above the mystical mayhem of Lemon, New Hampshire, which cannot be found on any maps I’ve searched.

Sean Hurley lives in a town called Thornton with wife Lois and son Sam. He submits audio musings to NPR; stories like “The Sweet Summer Sound of Lawnmowers” that are read in a style very unlike Sherwin’s gravelly blubbering, but in a writerly manner fitting of Atoms, Motion and the Void. He does regular open-mics, and his podcast has archives dating almost monthly as far back as 2009, with some odd ones in 2007 and even mysteriously 1911. The music and stories of Sleeves are as tied together, to strangeness in a strange land, as the lives of the Sherwin and Sean. Are they one and the same? Perhaps you should explore this case for yourself.

Sherwin Sleeves has had his identity reversed and switched in an authorial caper, discovered a sinister nexus inside his mailbox, and delivered a last will and testament as he found himself dying on Mount Grief, but the man is everlasting—held to life by the blogger, writer and musician Sean Hurley. As of this writing, in Sherwin’s most recent and sudden walkabout, aptly titled “This Old Man,” Sean decided to drop iTunes (“the endless amphitheater”) in favor of his website at RadioGhost.com (“the known closet”) and let his elder muse wander along with us in antique times under a larger moon, confessing that stilled fingers, empty pockets, and a cloudless sky are the fundamental principles of babbling. “Still alive, aren’t I? Didn’t die…” he remarks just as the podcast ends. For as infinite a man as Sherwin, and as varied a performer as Sean, the principles of babbling make for excellent storytelling and some of the starkest, strangest music you’ve never heard.

2 thoughts on “This Old Man, He Played Two: Songs From the Void with Sherwin Sleeves”